[For a review of how T4T and other forms of Reproducing Discipleship are impacting the U.S., see the Mar/Apr 2014 issue of Mission Frontiers.]

Imagine teaching someone piano theory but never putting them in front of a keyboard.

As unthinkable as this is, this is how we often approach the world’s most important teaching assignment—Jesus’ command to disciple all nations by going, baptizing and training them to obey all He commanded.

Now, mission field breakthroughs are rediscovering the multiplication principles revealed in the book of Acts.

The Greatest Breakthrough since Pentecost?

Many mission fields still experience slow growth, but an increasing number are seeing dramatic multiplication, of both believers and churches, in a pattern which has come to be known as “Church Planting Movements” or “CPMs.”

As defined by the International Mission Board of the Southern Baptist Convention, a Church Planting Movement is

a rapid and multiplicative increase of indigenous churches planting churches within a given people group or population segment.

Two decades ago, as missionaries sought to discover how to prepare for and participate in such moves of the Holy Spirit, they developed a notebook containing 100 ideas to try toward launching CPMs in difficult places.

ONE of these CPMs has proven so successful that the notebook has since been discarded in favor of the “best practices” revealed in T4T—a CPM which has been adapted and implemented in a wide variety of contexts around the world, among Muslims, Buddhists, Hindus, and even Postmodernists here in the U.S.

A decade ago in Asia, this successful church planter faced a new challenge.

Up to that point Ying and his wife Grace had been planting one church a year—winning 40 to 60 people to Christ, organizing them, then moving to a new city to start over. As you can imagine, his ministry was considered very successful.

Then he was taught the principles of “Church Planting Movements” and asked to seek God for a movement that would reach a three-city area enfolding 20 million people, among whom there were almost no believers.

Ying sensed the Holy Spirit ask him, “Ying, what is better than planting churches?”

Ying couldn’t think of anything, so the Holy Spirit gave him the answer:
“Training others to plant churches.”

Ying became excited about training others to do what he was doing, but before he finished praying he sensed the Holy Spirit asking him a second question:

“Ying, what is better than training others to plant churches?”

Again, Ying was at a loss. What could be better?

Then he sensed the Holy Spirit tell him:
“Training others to train others to plant churches!”

Ying met a pastor who invited his members to receive training from Ying in evangelism, and 30 people came. Ying presented what he thought was an ambitious plan, to plant 200 new gatherings of believers over the next three years. But as Ying taught these believers Ying kept hearing the same questions, representing four basic obstacles which kept them from winning the lost to Christ and planting new, reproducing gatherings of believers:

As Ying answered these four questions, He saw God change these average believers into confident and competent partners in the Spirit’s work of winning the lost, multiplying new believers and starting gatherings of believers.

Within a few weeks the believers Ying was training had started 20 new groups!

Seven months later, Ying could count 320 new groups that had formed, with 4,000 newly baptized believers. Already Ying had exceeded his ambitious three-year goals, and the work kept growing at an exponential rate.

Such naturally reports provoked a great deal of skepticism, so an outside assessment team visited the work.

They found that, rather than exaggerating, Ying had been consistently under-reporting—by as much as 40%.

Some gatherings had reproduced 17 times in just a year and a half!

In its first decade, this movement started 170,000 new gatherings with two million newly baptized believers who had learned to mine God’s word together and continue multiplying under the guidance of the Holy Spirit.

And adaptation and application of T4T principles continues accelerating other CPMs around the world!

“T4T” is short for “Training for Trainers.”

This movement is based on a few simple concepts:

Resources for Adapting T4T to Other Contexts

David was also the guest editor for the Mar/Apr 2011 issue of Mission Frontiers on Church Planting Movements.

David has described the core principles of T4T in this series of short, free, on-line videos, starting with this one:

These videos complement Steve Smith’s book—T4T: A Discipleship Re-Revolution, and were designed to accompany the on-line materials at T4Tonline.org, which supplement this book. 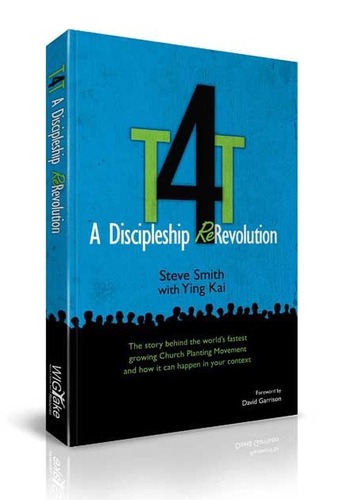 Browse the book or purchase the Kindle version on Amazon, get the best hard copy price from WIGtake Resources, and or get copies for your team through the bulk discount I’ve arranged.

T4T is also available in Spanish.

9 Responses to T4T (Training For Trainers)